After having spent the night on board I got up very early this morning in order to see the sunrise but the bay was covered by thick misty clouds! The dense fogs wraped everything into grey making the limestones looking like creatures from another planet 💟 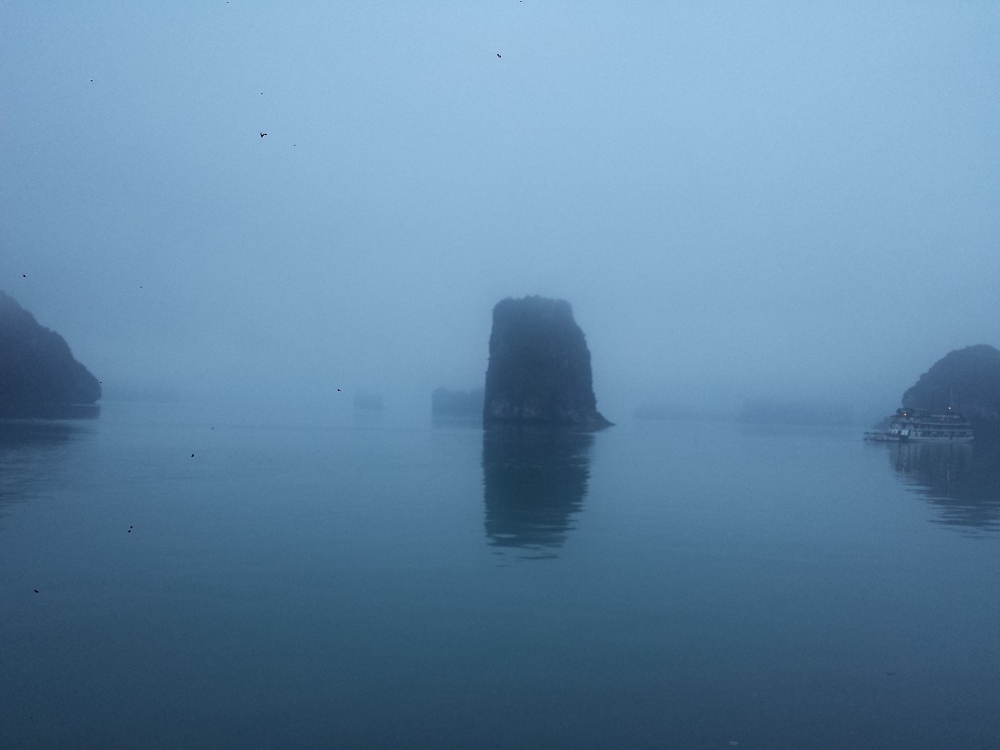 At midday the fog had risen now wrapping the tops of the higher limestone formations! 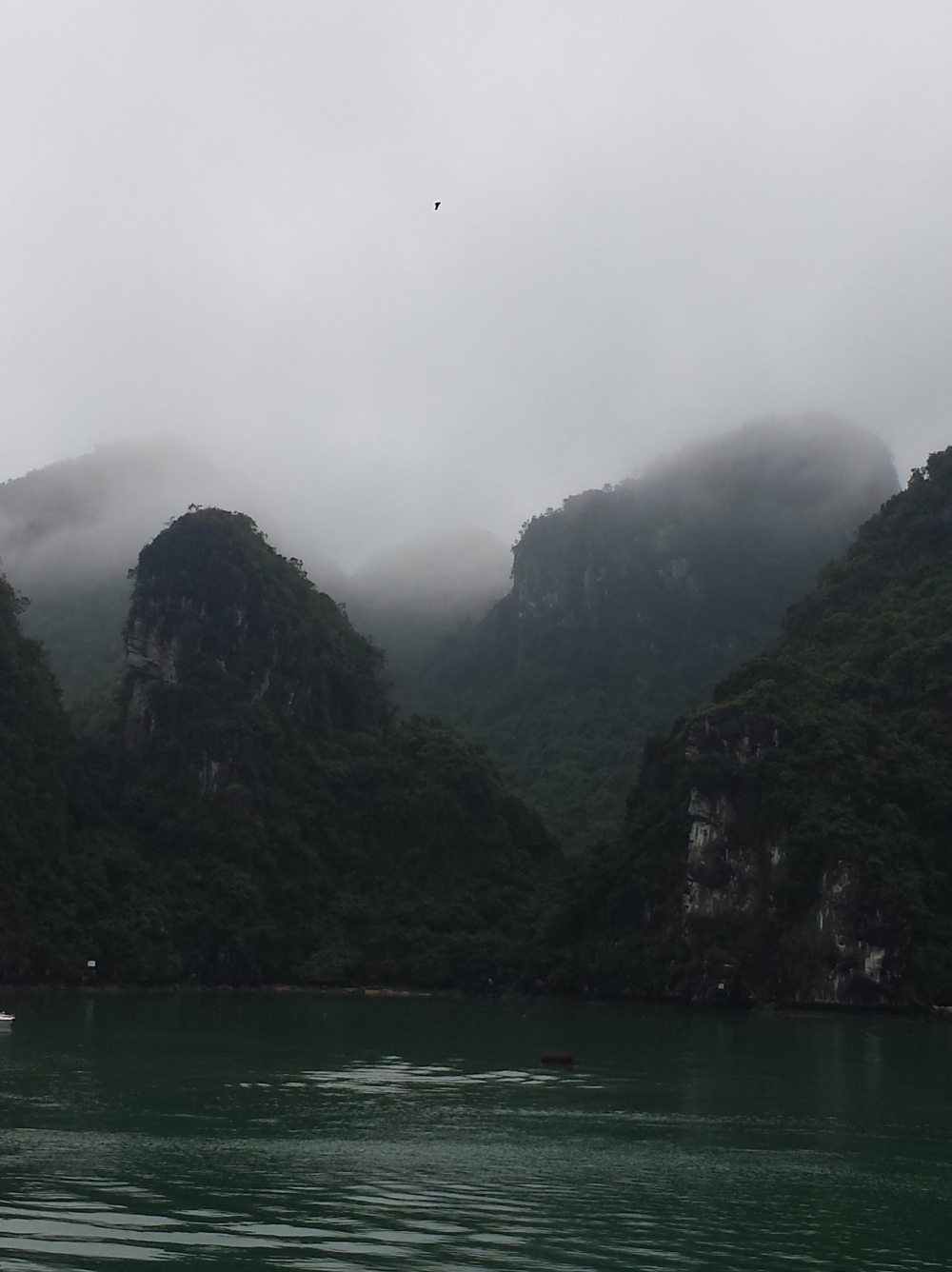 I decided to go on a kajak trip with one of the locals to the floating villages! It only took us a short time to paddle until the first village appeared! My self appointed guide Phong told me that approximately 500 people are living here on houseboats their whole life! They never leave! Even a primary school has been built up in order to teach their kids stuff like mathematics writing and reading! If the water wouldnt be there it really would look like an ordinary village 🙂 They have pets like dogs and cats too!
We passed a boat with huge lights on it! They use them in order to catch squid! At night they flash into a put out net floating under the water! Squid is attracted by light so they only have to lift it!
Moving on we could suddenly see a huge bird gliding above us so we tried to follow him paddling as fast as we could until we arrived at an limestone bow where stalactites and roots where hanging into the water! The bird was out of sight and we felt a little bit lost because we didnt remember at all where we came from 🙂 But instead of finding the way back I tried to convince Phong of my idea to go swimming because the water now had a beautiful emerald colour and there was no waste at all! The rock next to us looked very attractive to do deep water soloing too 🙂 A few moments before we jumped into the water suddenly a jellyfish appeared next to our kajak! It was a red one and my guide now seemed to be in a way distressed! I tried to calm him down and told him that I always wear a small bottle of vinegar 🙂
But he didnt want to jump into the water anymore he told me that the red ones could even kill a human being! Now I was convinced not to go swimming too and we suddenly realized that we were absolutely lost between the huge limestones! After a few minutes of brainstorming and discussing where our boat could be we saw a small fisherboat in the distance so we had no other choice but to paddle once again as fast as we were able to 🙂 Phong asked its owner how to get back to the village! After another half an hour of paddling we could finally smell the fish this meant that the floating village couldnt be far away any more! Even garbage was floating in the water again! Now we just had to follow the smell 🙂
Back on board we talked about jellyfishs 😆 I have heard that some people are making salad out of them! Phong told me that I could eat one at Dong Hoi! Wow this is my next stop! I really have to try this stuff 🙂 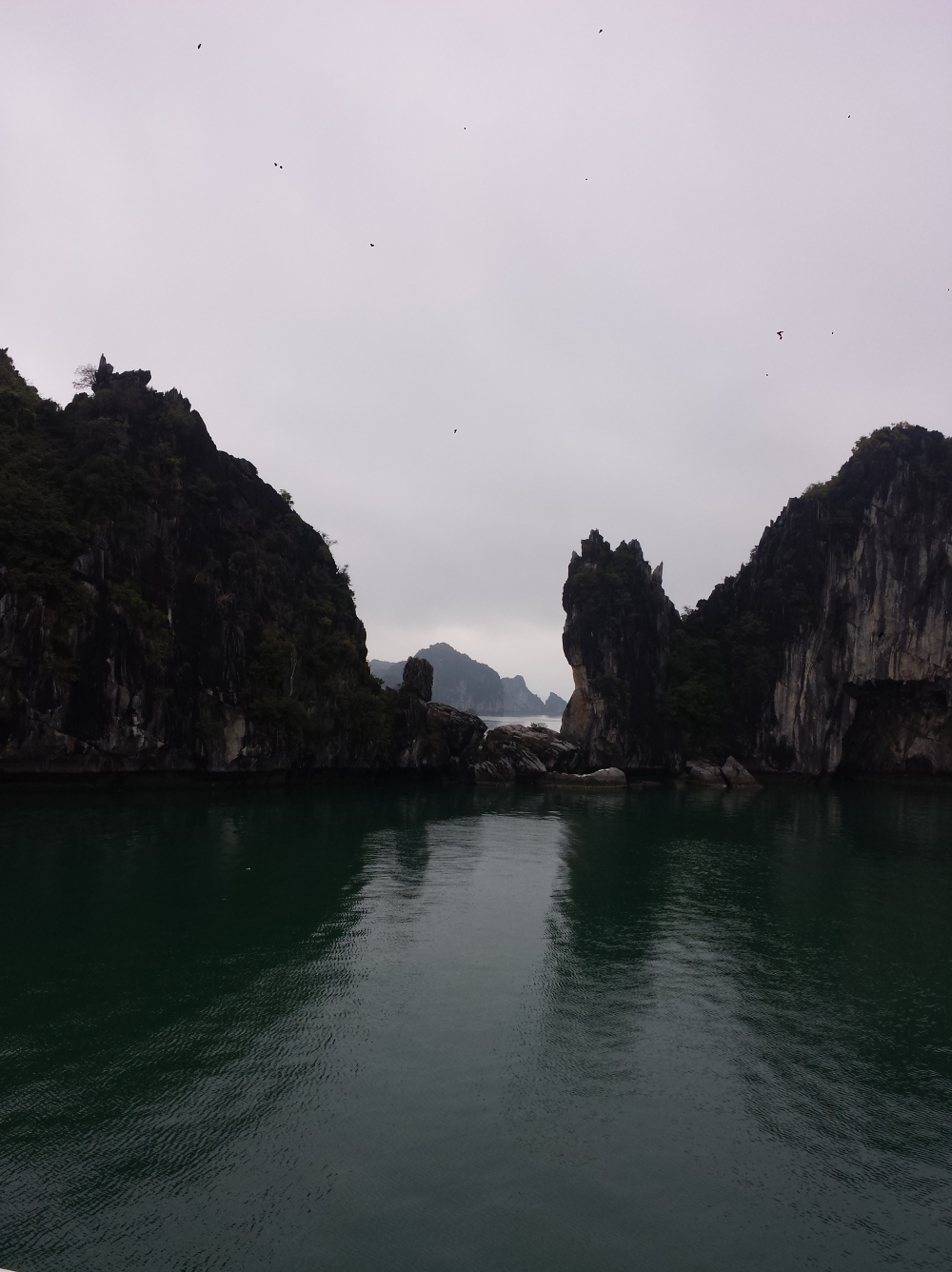